Although Horatio is the ultimate leader of the CSI team in Miami, Calleigh has always been his unofficial second-in-command. Both Horatio and Calleigh are totally committed not only to justice for the victims of the crimes they investigate, but to each other and their team. Time and again Horatio has counted on Calleigh for help and she never hesitates to give it - always coming through for him. By the same token, Horatio is incredibly protective of Calleigh - though he never underestimates or diminishes her abilites as a cop and a CSI. Both characters have a tendency to internalize their emotions and rarely let other's in, but their trust in each other is absolute and unshakable. They are also in tune with each other - often to the point of being able to communicate without words. Out of all of the CSIs, Calleigh and Horatio seem to know each other the best. They are a great pair, and Horatio would never disappoint, disrespect or hurt Calleigh like others have done in the past.

This pairing is most often referred to as DuCaine using their last names together, but it is also referred to as Lonely Road.
This ship name got its namesake from episode 01x17 "Simple Man".
Det. John Hagen: All I'm saying is, that's one hell of a lonely road he's walking.
Calleigh: I know. That's why I'm walkin' it with him.

Existence of DuCaine through the seasons 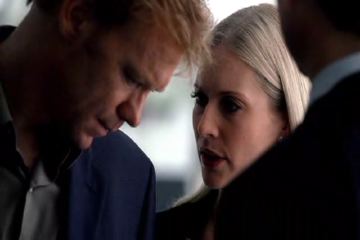 
Calleigh: Hello Handsome, I see your hand
from 01x06 "Broken"

Horatio stands there as Calleigh sleeps in ballistics.
Horatio: Calleigh
Calleigh: Oh my God, I'm so sorry. I closed my eyes just for a second
Horatio: Don't worry about it, you're a morning person
Calleigh: Horatio, I don't know what happened
Horatio: You're fine. Do me a favor and take a look at subject B, and tell me if you see anything peculiar about it.
Calleigh: The weight's all in the back
Horatio: See, normally when someone takes a step it's heel, ball, toe. Correct?
Calleigh: Mmhmm
Horatio: But in this case there's pressure in the arch and not in the heel or toe
Calleigh: Are you thinking his shoes are too big for his feet?
Horatio: When someone puts on a pair of shoes that are three sizes too large it can mean they're trying to hide their identity
Calleigh: Just like he did with the cameras. You know subject B steps lead all the way out to the storage room
Horatio: Hmm, okay, and we have trace soil on the fourth print, don't we?
Calleigh: Mmhmm
Horatio: Good. What would you like in your coffee?
Calleigh: Sugar
Horatio laughs as he walks off
from 01x06 "Broken"

Calleigh: Do you believe her story?
Horatio: I don't know. I guess that depends on whether you like seeing men dress up in your underwear or not
Calleigh: Personally, leather chaps, nothing else... That was a joke
from 01x07 "Breathless"

Horatio: So what do you get when a six-foot-tall man lays down with a three-foot-long rifle?
Calleigh: Hot flashes. But that's just me
from 01x09 "Kill Zone

Horatio: Have you considered a transfer to SWAT?
Calleigh: I don't look good in all black
Horatio: I beg to differ
from 01x09 "Kill Zone"

Horatio: ... a present for you from Alexx
Calleigh: Nasal mucus. And it isn't even my birthday
from 01x11 "Camp Fear"

Det. John Hagen: All I'm saying is, that's one hell of a lonely road he's walking.
Calleigh: I know. That's why I'm walkin' it with him.
from 01x17 "Simple Man"

Horatio: Wanted to see me?
Jack: I think we found our mole. Calleigh Duquesne just tested positive for cocaine
Horatio laughs
Calleigh: Horatio, I don't know what happened. I promise you that I've never done any type of drug
Horatio: I know you didn't. She will appeal
Jack: Appeal? Until then she's relieved of duty
Horatio: You're making a mistake
Jack: Your CSI pops positive and you don't think she's the mole?
Horatio: That's correct.
Jack: What ya talking about?
Horatio: You guys couldn't find your ass with both hands. Now you should be thanking her
Jack: Why?
Horatio: Because...if it's what I think, she just cracked the case
from 01x18 "Dispo Day"


Horatio: How you feeling?
Calleigh: Like a hummingbird on six cups of coffee.
Horatio: Describe that to me.
Calleigh: I feel confused, angry, confused... I know I said this before but I wanted to make sure you know I did not take anything...
Horatio: Okay, hang on a second... are your lips numb?
Calleigh: Yes.
Horatio: Okay. Now, what have you been doing for the last eight hours?
Calleigh: Tripp and I were following the mystery trajectory. We-we went to the tile place. I ate a granola bar. Uh, then we went back to the firearms lab.
Horatio: Okay. All right. Hang on a second. You went to the tile place. What did you find at the tile place?
Calleigh: I found a bullet, but no casings. It had gone through the door, and it had lodged into the tile. I think it was Italian marble, and I had a very difficult time digging it out.
Horatio: Okay, I think you've been dosed...
from 01x18 "Dispo Day"

Calleigh: Sometimes it's difficult to have family
Horatio: Sometimes, it's more difficult not to
from 01x19 "Double Cap" 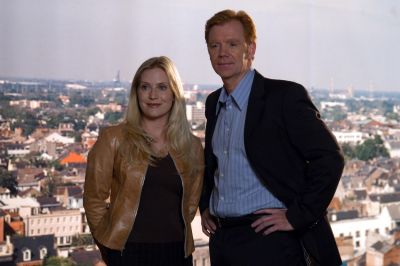 Horatio: So I heard you hurt yourself.
Calleigh: No. Did Detective Hagen tell you that?
Horatio: In passing. Are you okay?
Calleigh: All right. The exemplar spear gun did give me a run for my money.
Horatio: Can I see it?... Ouch.
from 2X02: "Dead Zone"

Horatio: How concerned should I be about you?
Calleigh: I'm fine.
Horatio: Are you sure? ...Okay
from 2x05 "The Best Defense" 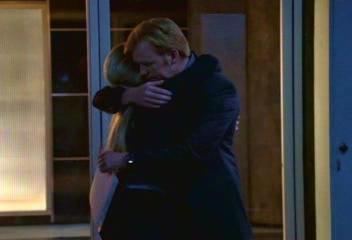 Horatio: You saved me
Calleigh: I wanted you to see this before I gave it to Stetler. He definitely had to look at his gun
Horatio: Lieutenant Caine's weapon expended six rounds. Tim Speedle's...Tim Speedle's malfunctioned. There are many reasons for a misfire, aren't there?
Calleigh: Faulty mechanism, low grade amunition, poor gun maintenance
Horatio: Designation of any one of those would be speculation on our part, wouldn't it?
Calleigh: We never speculate. Bottom line, the gun malfuctioned
Horatio: And that closes the IAB investigation, doesn't it?
Calleigh: Do you want me to help you...with Tim's things?
Horatio: No, thank you... Hey. Come here. You hang in there
Horatio and Calleigh hug for a very long time.
from 03x01 "Lost Son 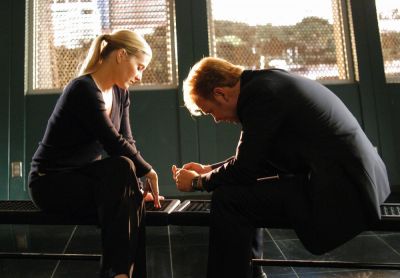 Calleigh: I can't believe Stetler put you in a holding cell
Horatio: It's what he does, Calleigh
Calleigh: Resden seems to be one step ahead of us at every turn, and you know that if the news gets this it'll look like there's blood on your hands when we know that isn't true
Horatio: But there is blood on my hands
Calleigh: That's why you asked me to bring the kit
(in the background a song is playing that says "in my arms, i will catch you" when Calleigh swabs Horatio's hands)
from 04x06 "Under Suspicion" 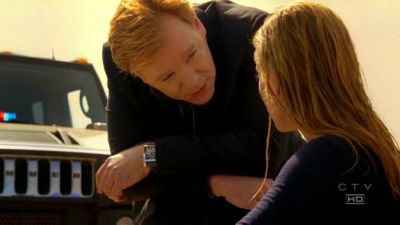 Horatio: Calleigh? Calleigh? Calleigh? I don't want you to move until we check you out, the paramedics are on the way.
Calleigh: The evidence is um-
Horatio: Right now, Sweetheart, that's not important
Calleigh: But it's all compromised
Horatio: Yes, everything, but you, Ma'am
from 05x03 "Going Under" 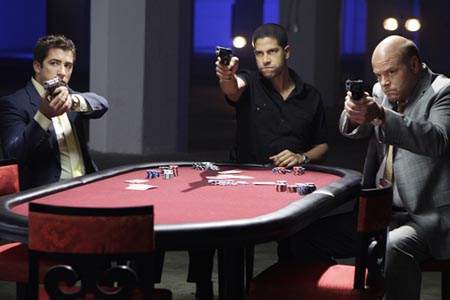 Abductor: Drop the guns, or I will shoot her.
Horatio: You're not gonna get the chance. Now if I were you, I'd fold. Don't you agree, Calleigh?
from 06x16 "All In"