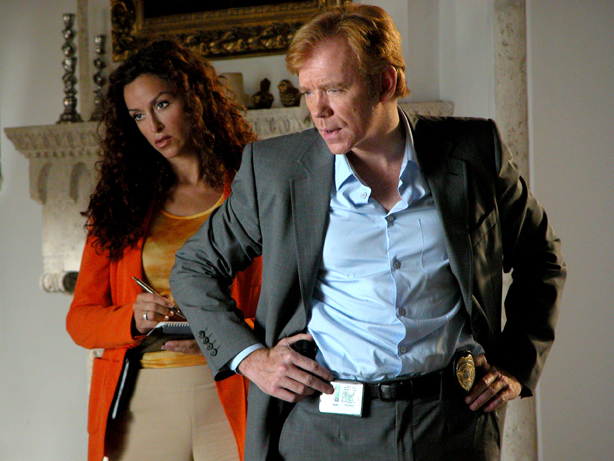 Do you see Horatio and Yelina together? Share your thoughts.
We've watched Horatio floating around the edge of Yelina's shattered world, being a steadfast brother-in-law who has tried to protect her from the truth about his brother's past and provide a father figure for her son, Ray Jr.
But, clearly, very purposeful editing leads us to conclude that there is the potential for more developing between them -- more than the filial love of family and the respect of colleagues for one another. Whether it is their mutual honor for the memory of Raymond Caine, poor timing, or some other propriety at work, they seem to connect only in the hero-walks-alone yearning vortex that ever envelops Horatio. Maybe Yelina realizes women who become romantically involved with Horatio sometimes suffer a bad fate!
Still, Yelina's dalliance with the hateful Rick Stetler was more than Horatio needed to take. That score will be settled, we can bet.

Horatio & Yelina Belong Together:
The fans first learned that Horatio secretly loved Yelina way back in episode, 117-Simple Man, the fans waited and watched their relationship develop for 3 years only to watch Yelina be sent off to Brazil with her ex-dead, cheating, drug using husband, then the fans had to suffer though season 4 and watch the unusual relationship between Marisol and Horatio develop; Horatio , Yelina and the fans have waited long enough for them to be together; they have chemistry and belong together; fans are getting tired of waiting for their relationship to move forward.
Yelina is scheduled to reappear in episode 522 "Burned"; the episode is scheduled to air in the USA on 4/30/07, hopefully both Yelina and Horatio will now feel free to let their relationship grow and develop because both Raymond and Marisol are dead, lets hope that this is the beginning of a true relationship and not just a couple of guest appearances by her character; Horatio and Yelina have wonderful on screen chemistry as a couple because they share a past and could be a happy couple in the future.